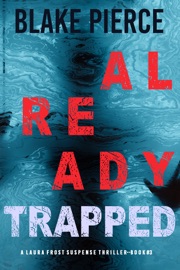 25-year-old female twins turn up murdered, on the same day, in different parts of Minnesota. A coincidence? Or the work of a diabolical serial killer? Only FBI Special Agent (and psychic) Laura Frost may be able to know the difference.

“A MASTERPIECE OF THRILLER AND MYSTERY. Blake Pierce did a magnificent job developing characters with a psychological side so well described that we feel inside their minds, follow their fears and cheer for their success. Full of twists, this book will keep you awake until the turn of the last page.”
--Books and Movie Reviews, Roberto Mattos (re Once Gone)

FBI Special Agent and single mom Laura Frost, 35, is haunted by her talent: a psychic ability which she refuses to face and which she keeps secret from her colleagues. Yet as much as Laura wants to be normal, she cannot turn off the flood of images that plague her at every turn: vivid visions of future killers and their victims.

When Laura is summoned to solve the case of the murdered twins, her psychic power floods her with an array of confusing—and urgent—messages. She may have just one chance to save the next victim.

But can she trust her gift?

A page-turning and harrowing mystery thriller featuring a brilliant and tortured female protagonist, the LAURA FROST series is rife with murder, mystery and suspense, twists and turns, shocking revelations, and driven by a breakneck pace. Fans of Robert Dugoni, Melinda Leigh and Lisa Regan are sure to fall in love. Pick up this fresh new mystery series and you’ll be flipping pages late into the night.