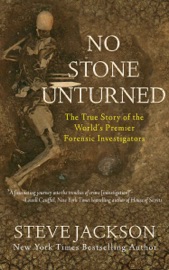 A body stuffed in a car trunk swallowed by the swirling, muddy waters of the Missouri River. A hiker brutally murdered, then thrown off a steep embankment in a remote mountain range. A devious killer who hid his wife’s body under a thick cement patio.

For investigators, the story is often the same: they know a murder took place, they may even know who did it; but without key evidence, or a body, pursuing a conviction is nearly impossible. That’s when they call NecroSearch International, a brain trust of the nation’s top scientists in a wide variety of fields, who along with law enforcement, use the latest technology and field techniques to locate clandestine graves and hidden secrets to solve “unsolvable” crimes.

In No Stone Unturned, Steve Jackson—who became a member of NecroSearch International in 2015—gives a captivating, insider’s look into a realm of crime investigation of which few people are aware.

“The book covers the group’s quirky beginnings and digs into its most important cases suspensefully; Jackson’s sharp eye misses nothing in the painstakingly rendered details. A must-have for true crime fans, it should also be of great interest to anyone fascinated with the practical applications of science.”—Publishers Weekly (starred review)
“Delves into cases that would make good novels, but they’re real. Furthermore, he describes a group of uncommon people performing uncommon tasks, and he does it with respect, accuracy and genuine style.”—Ron Franscell, bestselling author of Alice & Gerald: A Homicidal Love Story