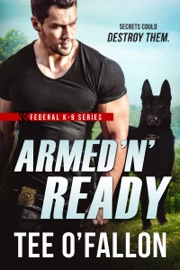 Massachusetts State Police Sgt. Nick Houston is as tough as they come, and he and his K-9, Saxon, are hot on the trail of a major illegal gun dealer. But his best lead—the beautiful owner of the Dog Park Café, Andi Hardt––is not cooperating. Doesn't matter how sexy she is or that his dog seems to be in love with her. She’s a suspect, and he won’t cross that line. Ever.

Andi Hardt sank everything into her dream business—the Dog Park Café, a restaurant catering to dogs as much as people. Now everything is in jeopardy because of one extremely frustrating, incredibly hot state trooper. Like it or not, she’s in Nick’s crosshairs, and he’s calling the shots. Her only option: cooperate, or lose everything she’s worked so hard for.

Nick and Andi are catapulted straight into the danger zone, forcing them to make life-altering choices and face their desires. Risking his life for Andi is the easy part. Risking his heart is the toughest assignment Nick will face.